The Pupil Premium Grant is an allocation of money that is given to schools to specifically assist children from low income families or other challenging backgrounds.  Schools receive the Pupil Premium funding to help students who are currently eligible for free school meals (FSM), those who have been eligible within the last six years for FSM, looked after children (LAC), post-looked after children and children who have parents serving in the Armed Forces (SC).

In response to the global pandemic, the government has provided an additional Recovery premium fund to top-up the existing pupil premium grant for the academic year 2021-2022.  This fund carries the same conditions of grant as the pupil premium and has been included in the Pupil Premium strategy statement below.

Number of students eligible for the Pupil Premium 2021-2022

How much has Testbourne been assigned for the 2021‐22 financial year?

The COVID-19 catch-up premium has been established to mitigate the effects of the unique disruption caused by coronavirus.  The grant will only be available for the 2020-2021 academic year.  Schools should use this funding for specific activities to support students to catch up for lost teaching time over the previous months and in order to support students to access the curriculum.  This could include accessing the National Tutoring Programme, which is another part of the government catch up package.

At Testbourne Community School, Mrs Sudds, Deputy Headteacher, has the strategic responsibility for leading and monitoring our Covid catch-up provision.

The government provides an additional literacy and numeracy catch-up premium for pupils coming into year 7 who did not reach the expected standard in reading and maths at the end of KS2. The purpose of this funding is to provide additional support to those students that most need it.  The Catch-up premium funding is used to pay for small group and individual interventions for those students we have identified as needing support.

As part of the national Covid catch up strategy, a discretionary one-off fund was made available to schools who wished to deliver a summer school provision during the school summer holidays in 2021.  The fund was ring-fenced to a summer school provision only.  Monies were released retrospectively via a claim based on actual spending and student attendance.  For full details regarding the conditions of funding please see: Summer schools guidance - GOV.UK (www.gov.uk)

A total of 142 (75%) of our incoming year 7 students joined us for our five-day Transition Week. Our cohort included 74% of those eligible for free school meals and 71% of those identified as SEND. 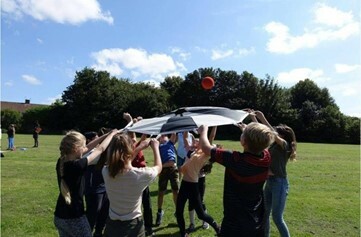 The first two days consisted of a rotation of subject sessions, delivered by our TCS teachers.  Students measured speed and distance of their paper aeroplanes in Maths, studied Shakespearean insults in English, completed an experiment in Science, made a pen pot in Design Technology and enjoyed performing in Drama and Music.

The second half of the week was facilitated by Wise UP, an external activity company.  On Wednesday students completed The Hub Challenge, which was a series of 32 team building challenges.  On Thursday and Friday students took part in Archery, an assault course and Bushcraft, including wood whittling, fire starting and shelter building. 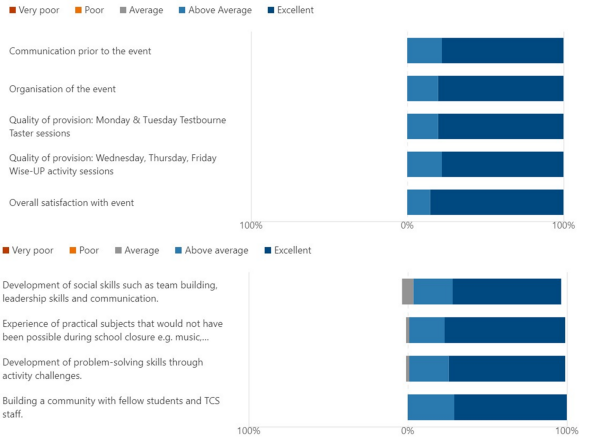 “We were slightly nervous sending our boys into 'school' during their school holidays, but the experience has been really good for them and they have come out positive each day. From the outside, the week appears to have been well planned, run and organised but as importantly it has given new students a chance to experience the school with just year 7's which is a real help. Thank you for all who were involved.”

“My son has thoroughly enjoyed it and actually told me more about his days than he has ever done during his years at Primary school, long may that last!”

“Made me feel less worried about him starting in September knowing he has made some new friends and got to know the school.”

“My son greatly enjoyed the whole week. Seemed to be well planned, balanced and a lot of fun for him.”

“My son was excited about starting Testbourne, but due to restrictions never was able to see the school as it would be. We had a tour which was excellently delivered to us, but this allowed him to get a proper grasp on the school and what to expect. He enjoyed every minute of every day this transition week and I think it worked so well that he has made new friends from other schools and not such a big gap to they see them again. He was excited to tell me all he had done and leant each day and the staff he had met.”